Where is the best place in Britain to enjoy an outdoor adventure?

As we head into autumn, there is no better time to get out and explore the great outdoors right here on our doorsteps. From the top of Scotland to the southern tip of Cornwall, the UK is brimming with beautiful natural landscapes that are made for adventures. Lace your walking boots up and jump on your bike because it is time to go on an adventure

Moreover, with foreign travel still subject to various levels of restrictions, more and more people are opting for a staycation and discovering the delights available to them at home. From hiking and running to cycling, canoeing and even skiing, the list of adventurous activities you can pursue in the UK is endless.

But where in the country is the best place to visit if you are looking for an adventurous time? By taking into account the availability of different outdoor activities, as well as the natural features such as lakes and mountains, we have been able to definitively determine the best places across Britain for adventure. 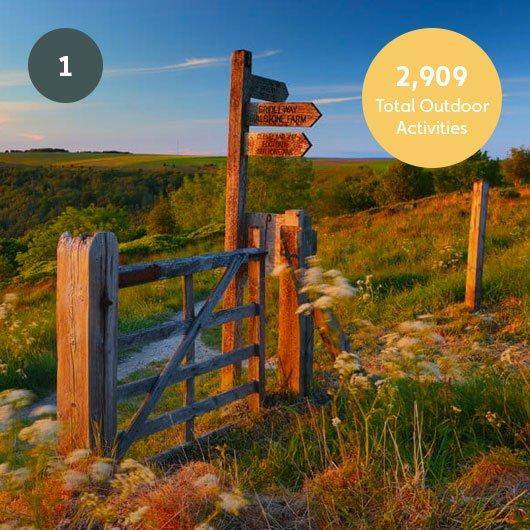 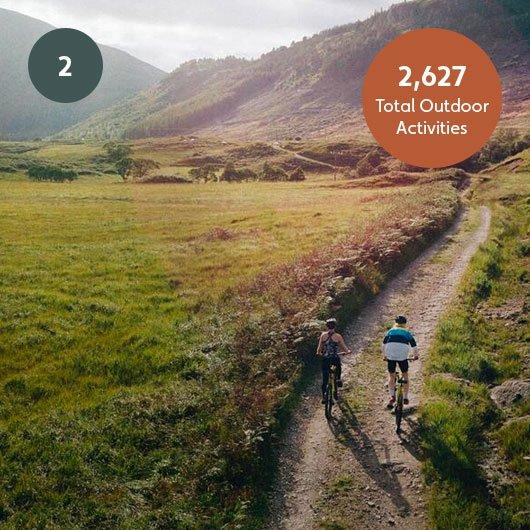 Despite its name, the council area of Highland does not encompass the entire Scottish Highlands National Park; but it does contain a large enough chunk of it to rank at number two in the rankings. It contains by far the largest number of P600 mountains, with 56, and combined with 309 lakes (which is also the most in the country) the beautiful natural landscape of the Highland region cannot be challenged north of the border. 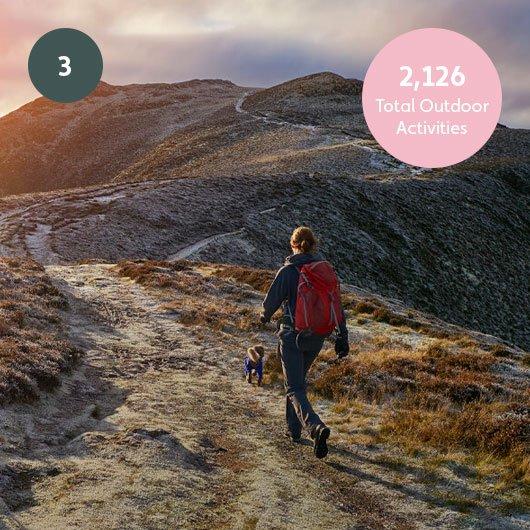 The furthest north county in the west of England ranks in third place with 2126 outdoor adventure activities, Cumbria is home to the Lake DIstrict national park so it is perhaps unsurprising that it ranks so highly. Cumbria is one of the best counties for Walking and Climbing, with over 1,000 walking trails and 500 climbing routes. Despite being named the Lake District the region has far fewer lakes than the Highlands.

The UK Counties best equipped for each type of adventurous activity

We looked at every country across the UK from the Highlands of Scotland to Greater London to reveal which county was the best for an adventure outdoor activity. Helping you find your next family adventure destination, based on the outdoor activity you love the most! 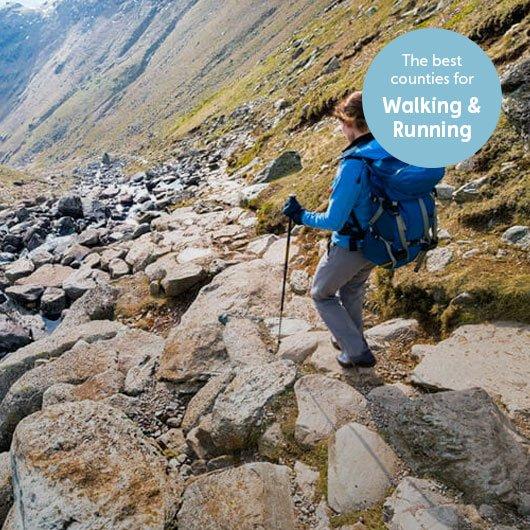 Cumbria and Cambridge are very different parts of the country, with one being very hilly and located in the very north of England, and the other being flat and situated in the south. However, you’ll need your walking boots for both as they have over 1,000 walking trails each which means they share the joint top of the rankings for this category. Cumbria’s Lake District includes many famous walks up England’s biggest hills such as Scafell Pike and Helvellyn, as well as popular multi hill rounds such as the Fairfield and Kentmere horseshoes. 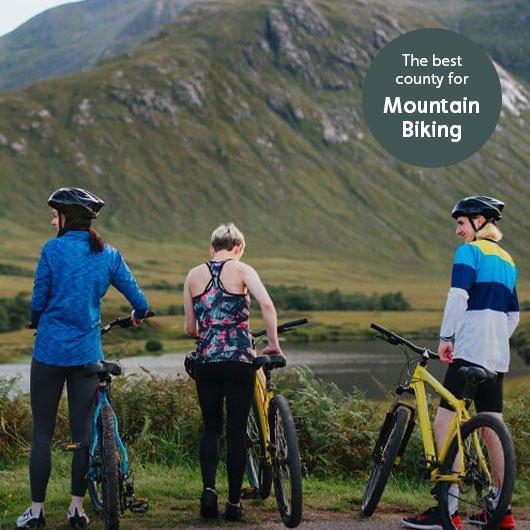 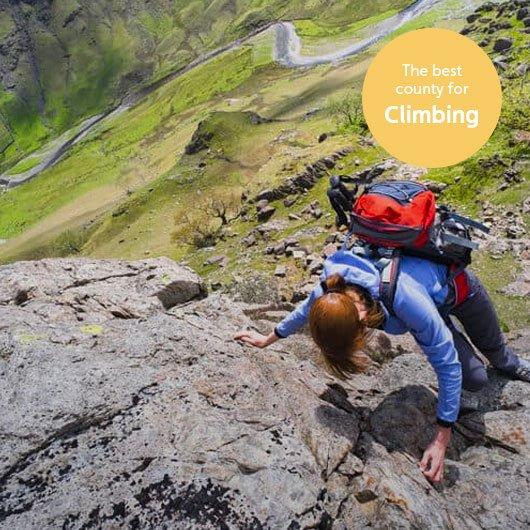 Once again Cumbria comes out joint top of the rankings in terms of the number of climbing routes with 500+, this is shared with the North Wales county of Gwynedd. Both of these counties are home to mountainous national parks in the shape of the Lake District and Snowdonia respectively, consequently, it is unsurprising there are a lot of official climbing routes in this area. 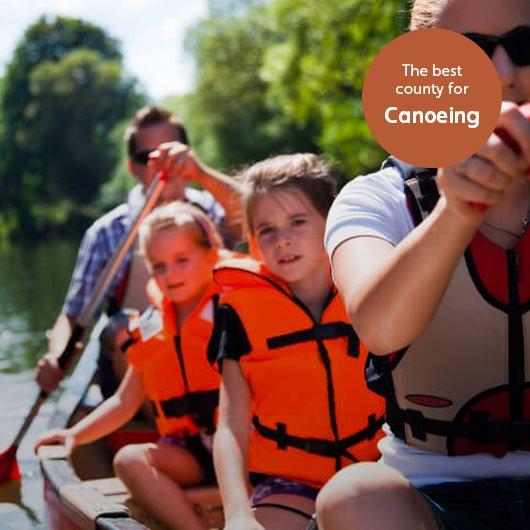 Canoeing and kayaking is the only activity that has the most centres in southern areas of the UK compared to elsewhere in the country. Greater London has the most with fifty centres across the capital region. Hertfordshire and Surrey are second and third with 45 and 44 centres respectively. Despite the southern regions having the most clubs, the most lakes on which to canoe and kayak are located further north. 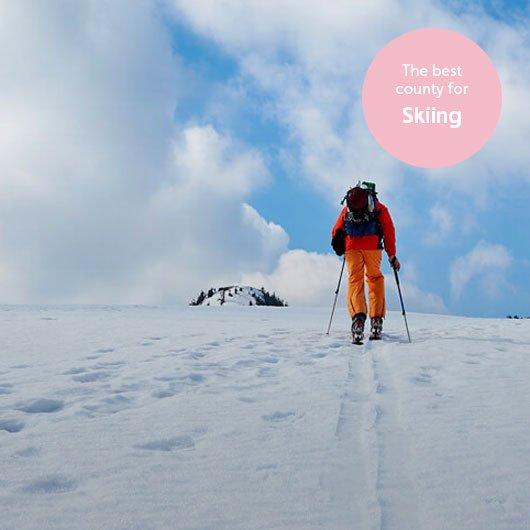 One outdoor adventurous activity that you do not typically associate with the UK is skiing, however, with Alpine and Pyrenean trips currently unavailable, a Scottish ski season is becoming a lot more popular. The Highland region has four outdoor ski slopes, which is double the two in the Lake District. Additionally, the more adventurous skiers can find wilder routes up in the mountains of the Cairngorms as well as other Scottish mountains, and those in Northern England. 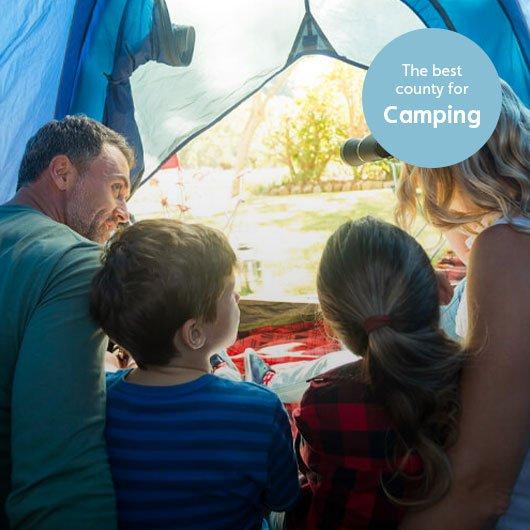 The best overall county for outdoor adventures is North Yorkshire, and one of the reasons for this is the vast number of campsites dotted around England’s largest county. Remember your tent and make the most of the beautiful campsites in North Yorkshire. In total there are 530 total campsites in the county, this is 35 more than second placed Cornwall.

There are some natural features that make an area more suited for adventurous activity, which come in the form of geographical features such as lakes for swimming and water sports, as well as mountains for walking and climbing. 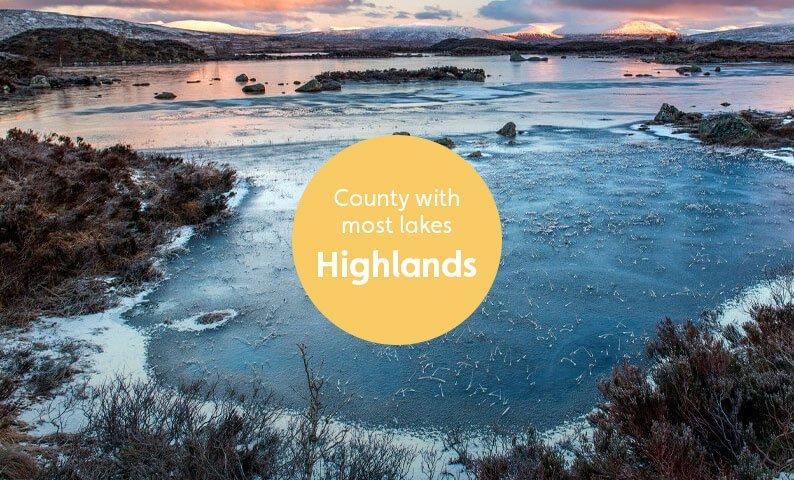 Counties With The Most Lakes

The Highland region of Scotland has by far the most lakes and high mountains with 309 and 56 respectively, the second-highest number of lakes are contained in Argyll and Bute in western Scotland, and Dumfries and Galloway in southwest Scotland. South of the border Cumbria has the most lakes with 21, and Gwynedd has the most in Wales with 15.

The biggest lake in the UK by far is Lough Neagh in Northern Ireland which is a ginormous 150 square miles, this is more than 120 square miles larger than Loch Lomond and Loch Ness (the two biggest lakes in Scotland). Windermere is the largest body of water in England, but it only has an area of just under 6 square miles. 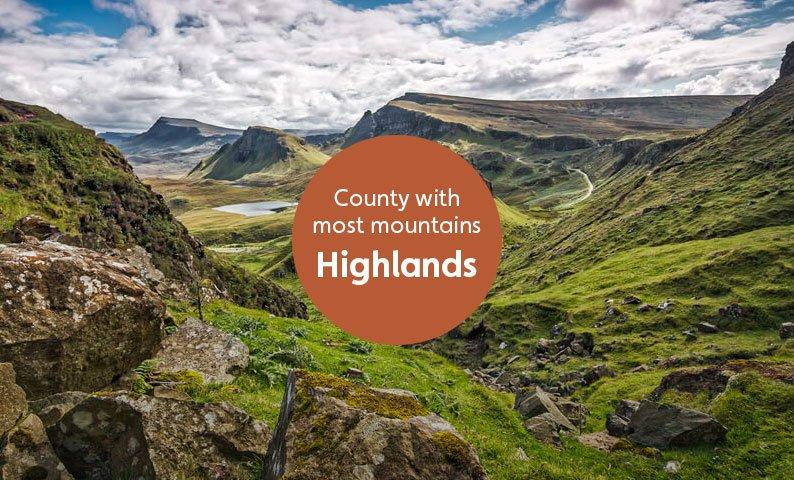 Counties With The Most Mountains

Mountains over 600 meters are considered major mountains and classified as a P600 mountain. Despite the UK having countless mountains, there are much fewer of these “major” mountains across the land, in fact, there are only 96 in total. Only four of these are in England and all reside in the Lake District, with Scafell Pike being the highest at 978m. There are eight in Wales with most of them being in Snowdonia, the tallest of which is Snowdon at 1,085m. Northern Ireland’s Slieve Donard is their only major mountain, standing at 850m.

However, most of the highest peaks in the UK are located in the Scottish Highlands and are known as the Munros. The tallest of these (and subsequently the highest point in the UK) is Ben Nevis, whose foreboding snowy peaks glare down over the surrounding land from 1,345m up. Consequently, the area most naturally equipped for adventure is the Highland region of Scotland.

Mountain bike and horse riding trails were found from Trailforks.com

Climbing routes were sourced from The UK Climbing Logbook

Canoe and Kayak club locations were sourced from British Canoeing

Number of campsites were sourced from UK Campsite

The number of Lakes were sourced from UK Lake Map

The number of P600 Mountains was sourced from Harold Street